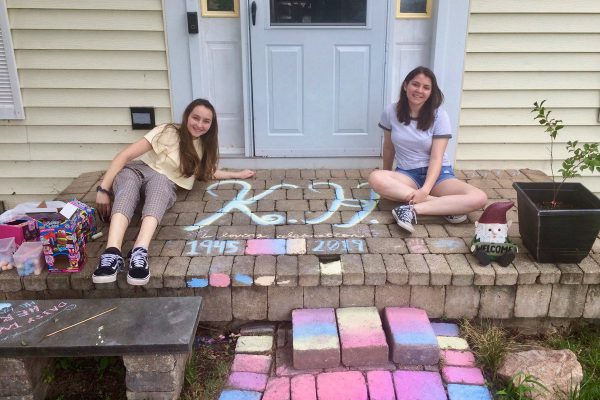 The gong can be a beautiful addition to a memorial gathering. We were honored to be part of this one.

Memorial for a friend:

A long time friend and mother of a dear friend of mine died last year. Too soon.

K’s surviving family chose a day last August 2019 to honor her memory. The day intentionally corresponded with the annual family reunion barbeque, a decision of which their late mother would have heartily approved.

I offered to bring the gong. She had wanted to hear me play while alive but never had the chance.

When the day came, the walkway leading to the front door of the house of K's youngest son was colored in rainbow colored chalk.  "K.H. 1945-2019" was written on the front porch.

Family and friends arrived. Many had not seen one another for way too long a time. Greetings and life updates were shared. As happens at such gatherings.

Great barbecue was lovingly prepared, hours in the making; and gratefully consumed.

After a time we gathered in front of an altar of photos in the front room to remember and honor and feel the still wide open space that K’s loss left in our lives.

A silence. A space.

We filled that silence, that space with stories and memories (and laughter and tears.)

Then we all made a perfectly natural segue to the back yard.

The gong had been set up in a corner of the yard to accompany the launching of paper lanterns in K's memory.  Her youngest  grandchildren were given the task of opening the lanterns and passing them to the adult and high school aged grandchildren to be lit and released to the wind.

One by one by one they rose in shades of yellow, green, violet, red and blue as the sound of the earth gong first gently rolled then warmly radiated and finally, joyfully roared as the floating, glowing paper rainbow rose to meet the clouds.

Everyone looked skyward. A family, a gong, a few more tears, then smiles, and laughter to honor a life well lived and well loved.

And then? Well, another drink and desert of course!

Healing from the grief of the loss of a woman, a daughter, a sister, a mother, a mother in law, a grandmother, a community activist and motivator, a good neighbor, an all around cage rattler and dear, dear friend was well underway.

All at a Sunday afternoon family reunion barbeque. Exactly the way KH would have wanted it.